HTC One Mini has leaked quite a few times already and it is rumored to be coming this quarter. Today another set of pictures leaked through a Bulgarian site SmartNews, these leaked photos show the device in its full glory. The latest leak confirms some of the specifications of the device that are rumored before. It is powered by a dual-core processor but the processor make is not clear, probably a Snapdragon S400 or S600.

Other specifications include 2GB of RAM and 16GB of internal storage. The device is running on Android 4.2.2 Jelly Bean operating system with HTC Sense 5. The device will come with a 4.3-inch screen at HD resolution (1280 x720) and will have a pixel density of 342PPI., at this resolution the 4.3” screen might be looking good.

There is no information on the camera though in this leak, but previous leaks suggested that it will launch with Ultrapixel camera seen in its bigger brother HTC One and Butterfly S.

The HTC One mini will have strong competition from the Samsung Galaxy S4 Mini, the pricing of the device is critical. If the rumors are true we should see this device by the end of the third quarter. 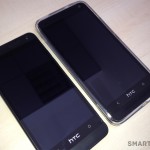