It features a 6-inch ClearBlack IPS LCD display with HD (1280 x 720 pixels) resolution, the pixel density of the display is 245ppi. It packs a dual-core Qualcomm Snapdragon S4 processor clocked at 1.7GHz. It comes with 1GB of RAM and 8GB of internal storage. Internal memory can be expanded with a micro SD card with a maximum cap of 64GB. Usual Connectivity options are included with 4G LTE but there is no NFC in this phone. It packs a 3400mAH battery under the hood to power up the device. On the imaging front it comes with a 5MP rear camera and a VGA front camera. It will include the all rounder Nokia Camera app for image capturing and manipulation. It will run on the Windows Phone 8 operating system with Lumia Black interface. 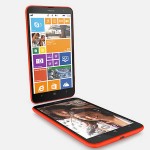 Price & Availability: It will be available in the early 2014, the roll out will start from China, and Vietnam later it will be expanded to other parts of Asia and Europe. It will carry a price tag of $339 before taxes and carrier subsidies.