Sony has launched two new smartphones for the Indian consumers, he phones E1 and E1 dual are aimed at music buffs. Sony has priced these phones starting at Rs 9490 for the E1 and Rs 10490 for the dual-SIM variant of the E1 called E1 dual. Sony has launched Xperia E last year, the E1 originally announced at CES this year is a followup to the Xperia E. The single SIM variant will go on March 10 followed by the dual SIM Variant on March 25th.

Sony Xperia E1 features a 4-inch Display with WVGA (480 x 800) resolution, with a pixel density of around 233ppi. This is ok for the price point it operates. It is powered by a 1.2GHz dual-core Snapdragon 200 processor from Qualcomm along with 512MB of RAM. The internal storage is pegged at 4GB, it also comes with a micro SD slot for memory expansion upto 32GB. It will be available in Sony standard colors that is Black, White and Purple

Xperia E1 runs on Android 4.3 Jelly Bean out of the box skinned with Sony’s custom UI. Other specifications of the phones include a 3-MP rear camera which is capable of doing 720p videos, there is no front camera though. Camera is one of the weakest points of this phone at just 3MP rear camera, the competition is giving much better cameras interms of pixels. It packs a 170mAh battery under the hood for providing juice, the battery is rated for 9hours of talk time and 551 hours of standby time officially. Connectivity options include Wi-Fi, Bluetooth, micro USB, GPS, dual SIM, 3G etc.

Sony is targeting music fans with this phone, so Sony has included best audio tech in this phone. It comes with ClearAudio+ technology and xLoud enhancements etc. The phone also gets a dedicated walkman button for quick access to the music player. The speaker of the E1 is touted to deliver 100Db of sound, to highlight this feature Sony claims that “even a motorcycle won’t interrupt your music.” 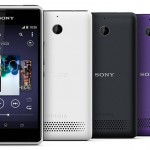 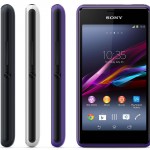 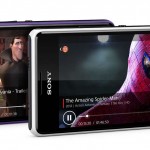