You are here: Home / Archives for Amazon Phone 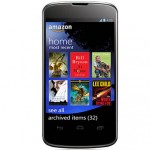 Amazon phone rumors were not uncommon, although we have not seen a phone from Amazon till now but earlier reports suggested that Amazon is at least building two phones and one of them could be a 3D interface phone. A new report suggests that HTC might build phones for Amazon in the near future, ... END_OF_DOCUMENT_TOKEN_TO_BE_REPLACED

Amazon is mulling to offer a free smartphone to users according to a report on jessicalessin.com. Amazon Kindle phone is rumored from long and according to previous reports it is working on two phones with one being a 3D smartphone, but till now there is no concrete information on these plans. ... END_OF_DOCUMENT_TOKEN_TO_BE_REPLACED