You are here: Home / Archives for GeeksPhone 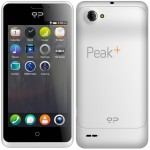 GeeksPhone has put up the Peak+ smartphone for pre-order, this is an improved version of the Peak smartphone from GeeksPhone that released few months back. The Peak+ runs on the Firefox OS 1.1 and is up for pre-order with a price tag of 149 Euros. The price is same as the Peak phone, according to ... END_OF_DOCUMENT_TOKEN_TO_BE_REPLACED