You are here: Home / Archives for Mailbox 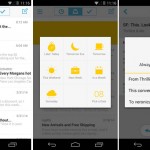 Mailbox is a popular iOS app, it generated so much hype when it launched that nearly a million people lined up as a wait list to get the app. Dropbox eventually acquired the app, it remained as iOS exclusive till now, but things are changing now as it is getting released for other platforms. Dropbox ... END_OF_DOCUMENT_TOKEN_TO_BE_REPLACED