You are here: Home / Archives for Sony Lens Cameras 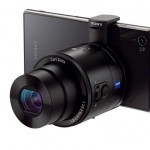 Sony has announced QX series lens-style camera at IFA Berlin today along with the Sony Xperia Z1 smartphone. These QX series of camera have everything a camera need in them except the viewfinder. You can attach these lens-style camera as Sony calls it to your smartphone and instantly turn into a ... END_OF_DOCUMENT_TOKEN_TO_BE_REPLACED