You are here: Home / Archives for Temple Run2 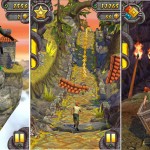 Temple Run is one of the popular never ending game, there are lot of spin offs that are inspired from this popular game. Temple Run for Windows Phone 8 was released some time back and it was well received. Now the creators of the Temple Run series Imangi Studios has released the sequel for Temple ... END_OF_DOCUMENT_TOKEN_TO_BE_REPLACED