Motorola announced the expected Mot G smartphone in Sao Paulo, Brazil. Motorola is targeting it as an affordable smartphone compared to handsets that are already in the market. During the presentation Motorola CEO, Dennis Woodside takes a dig at Samsung and Apple for expensive phones.

Moto G features a 4.5-inch display with HD resolution (1280 x 720p) along with Corning Gorilla Glass protection. It is powered by a 1.2GHz Quad Core Qualcomm Snapdragon Processor with Adreno 305GPU. It comes with Android 4.3 Jelly Bean out or the box and Motorola guarantees update to Android 4.4 KitKat.

In the camera department it comes with a 5mP rear camera with LED flash and a 1.3MP front facing camera. Moto G packs 1GB of RAM and either 8GB or 16GB of internal storage. Availability: Moto-G is launched today in Brazil and available immediately. Europe in this week and parts of Latin America and parts of Asia, Canada in the next few weeks. It will launch in India and US and in some other countries early Jan 2014. The back shells are interchangeable and they will be available in a range of colors. 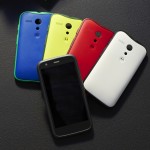 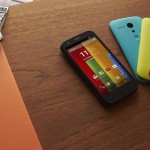