As we are nearing the launch date of Samsung Galaxy Gear we are seeing more and more leaks of the smartwatch. First specifications leak and then images of the Galaxy Gear Manager app leaked. The latest leak came from VentureBeat, they got hands on a nee promo video which showcases a developer prototype of the watch.

According to the report the device they have seen is a developer prototype and may not be a final design, but the final design may not be far off from this one. Samsung is known to send prototypes with fake shells around devices to protect the devices from leaks.

If the final design is something like what we see in this picture then that is worrisome for Samsung and for fans who are eagerly waiting for the device to show up. The leaked image shows that the design is something like a wrist watch with thich bezels above and below, overall it looks plain ugly and not comfortable at all. It is using a Suqare OLED display which correlates with the previous leaks, but it looks rectangular with those thick bezels.

The smartwatch is chunky and looks bulky with that screen, also the strap is large enough to hold speakers on it. It connects with Samsung Galaxy Android devices with Bluetooth and may also connect to other Android smartphones. Galaxy Gear also has a Wi-Fi connectivity and email support. It will also include apps from Android appstore.

Galaxy Gear has a 4-MP camera on strap with speakers on the clasp. It has a health tracker, you can take photos with the built in camera and check your food intake etc., those are the details for now. We are not far from the launch date, just two more days and we will know what Samsung has instore for us. 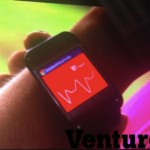