You are here: Home / Archives for Chromebox 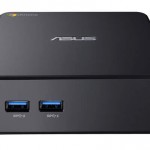 Asus announced Chromebox desktop PC targeted at home internet users. The Chromebox like the previous Chromebooks will run on Chrome OS. It is not the first Chromebox Samsung has previously announced a Chromebox but that didn't take off as expected. Asus Chromebox is powered by Intel Haswell based ... END_OF_DOCUMENT_TOKEN_TO_BE_REPLACED