You are here: Home / Archives for Huawei Honor 3 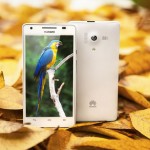 Huawei has officially announced the Honor 3 in China, it is the successor for the Honor lineup first announced as Honor in 2011 and Honor 2 in 2012. The phone running Android 4.2 Jelly Bean is available for users China but it is not clear when it will come to other markets. It is a water and dust ... END_OF_DOCUMENT_TOKEN_TO_BE_REPLACED