You are here: Home / Archives for K6 Power 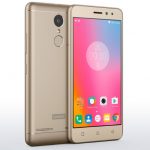 Lenovo has launched a new smartphone on Tuesday named K6 Power. Lenovo has priced this smartphone at ?9,999 and will be sold exclusively via Flipkart like some of the Moto phones. Lenovo has recently became the second largest smartphone manufacturer in India after Samsung. Lenovo and Moto has sold ... END_OF_DOCUMENT_TOKEN_TO_BE_REPLACED