You are here: Home / Archives for Karbonn Titanium S5i 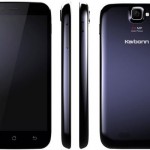 Karbonn Titanium S5i is the latest budget Android smartphone from Karbonn Mobiles. Karbonn has not yet officially announced this device, it appeared on a couple of online retailers including Flipkart. Karbonn S5i is carrying a price tag of Rs 7,990, that means it will compete with several budget ... END_OF_DOCUMENT_TOKEN_TO_BE_REPLACED