You are here: Home / Archives for knockon 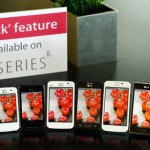 LG announced that its L Series II smartphones will get “Knock” feature in 2014. LG first introduced this feature with LG G2 and called KnockON, later the name changed to Knock. Knock feature will allow users to double tap the phone to wake it up. The rollout will begin in January 2014 through a mai ... END_OF_DOCUMENT_TOKEN_TO_BE_REPLACED