You are here: Home / Archives for Subway Surfers 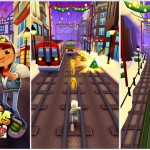 Subway Surfers game is now available for Windows Phone 8 devices. This is another endless running game similar to the Temple Run series. Killoo Games and Sybo Games games have released their popular game to the Windows Phone users. You have to run through the subway collecting coins and running as ... END_OF_DOCUMENT_TOKEN_TO_BE_REPLACED