You are here: Home / Archives for Xperia SP 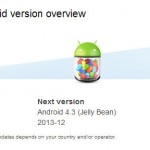 Sony has released plans for updating some of its devices to Android 4.3 and Android 4.4 versions. Android 4.4 KitKat is the latest version of the Android and Sony will release the update to its 2013 flagship models. The list of devices that will get the update include Xperia Z, Xperia ZL, Xperia ZR, ... END_OF_DOCUMENT_TOKEN_TO_BE_REPLACED